Alpine has launched its new brand identity alongside its A521, the 2021 car that will be the first to run in Formula 1 under the team’s new name.

The former Renault team had already had a brand launch earlier in the year when it showed off an interim winter livery, but the new car appeared in its final colors, with the traditional Alpine metallic blue being supplemented by the red, white and blue of the French and British flags. Alpine CEO Laurent Rossi says the target is to be regular podium contender with the new car.

“Today we are proud to present Alpine F1 Team’s first ever Formula 1 car that will compete in the 2021 championship,” Rossi said. “This is an important milestone for Alpine, as it positions itself as the brand at the forefront of Groupe Renault’s innovation.

“Alpine naturally finds its place in the high standards, prestige and performance of Formula 1 and we’re eagerly anticipating the debut of the A521 piloted by our drivers, two-time Formula 1 world drivers’ champion Fernando Alonso and Esteban Ocon. 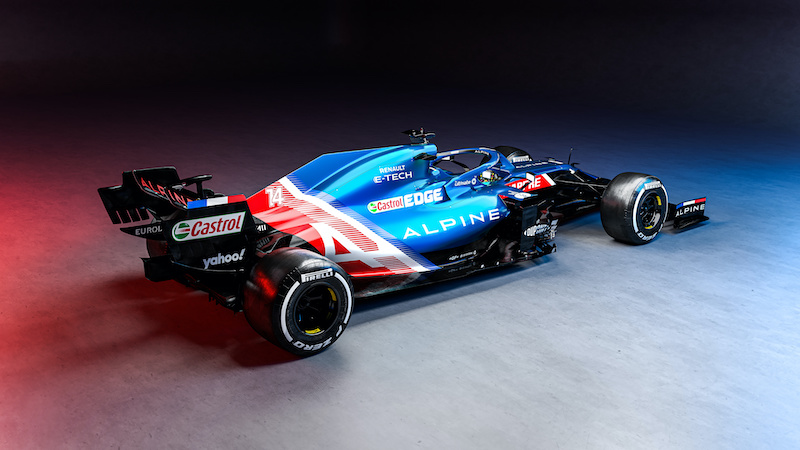 “This year our objective is clear, to continue the momentum that was garnered last year and fight for podiums. Our long-term vision is to see the Alpine name on the top step of the podium in Formula 1. Motorsports is in our DNA and now is the time for Alpine colors to race and compete in the pinnacle of motor racing in Formula 1.”

The new car will run for the first time on Wednesday at Silverstone, with Esteban Ocon completing a shakedown for Alpine. Teammate Fernando Alonso will not drive before the Bahrain test as he is still in Switzerland following a cycling accident and faces significant self-isolation time if he travels to the UK.