Rainfall prior to the start of IMSA’s 100-minute qualifying race that set the starting order for next weekend’s Rolex 24 At Daytona made for plenty of spins, crashes, and drama that kept the pace car busy for the first half of the event.

Once the sun broke through and the racing surface dried, some familiar teams and drivers had breakthroughs of their own as Action Express Racing’s No. 31 Cadillac DPi-V.R and Corvette Racing’s No. 4 C8.R delivered for General Motors with overall and class victories.

Felipe Nasr and Pipo Derani led more than half the race for AXR, with Derani (pictured above) closing the show and beating Harry Tincknell in the No. 55 Mazda RT24-P (+3.664s), and Loic Duvall in the No. 5 JDC-Miller Motorsports Cadillac in third (+4.627s).

“It was awesome — I love this new format. It gives all the drivers and teams a feel of what it’s going to be like next week but for many more hours,” said Nasr. “What made today a little more difficult was the weather conditions. The rain came in a few minutes before the race start. Nobody was expecting that. It puts the drivers in a different awareness. I just worked myself up. I could see the car was handling well and that transition to the dry was going to be key in the race. It was exactly what happened. We came in, we took advantage of the yellow flag to put on slick, dry Michelin tires. It was all about getting temperature in them. Once I had the temperature I could feel the Whelen Engineering car was handling great. I could work myself up through the field and it felt great to get myself into the lead.”

Meyer Shank Racing’s No. 60 entry was the first of the two Acuras in the field, placing fourth — setting the two front rows for the Rolex 24 with Cadillac, Mazda, Cadillac, and Acura — with Olivier Pla in his ARX-05 (+6.995s).

IMSA newcomer Kevin Magnussen wasted no time when the green flag waved. Starting third, the Cadillac Chip Ganassi Racing driver went hunting for grip on the damp track and found enough to rocket by both Mazda RT24-Ps before the first lap was finished.

The Dane would hold the lead through the opening 42 minutes that featured two caution periods, but CCGR’s decision to leave Magnussen out on the second yellow, as the rest of the DPi class pitted to trade their Michelin rain tires for slicks on the drying track, proved costly.

Left out on rains, it wasn’t long before the No. 01 Cadillac DPi-V.R was passed with ease by JDC-Miller’s Tristan Vautier and AXR’s Felipe Nasr. Magnussen soon pitted for slicks and fell to last in class; teammate Renger van der Zande took over and recovered to finish 74.8s arrears. 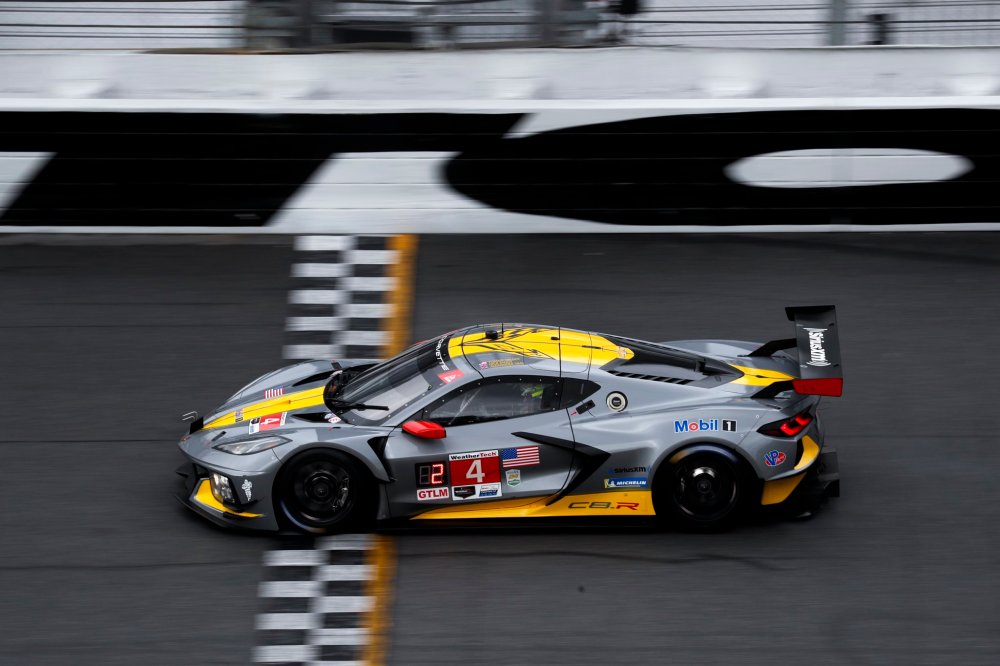 Locking out the front row for the Rolex 24 in GTLM, Corvette’s Nick Tandy led a 1-2 for the defending class champions as teammate Nicky Catsburg trailed home by a fair distance in the No. 3 C8.R (+12.054s); the new No. 79 WeatherTech Racing Porsche 911 RSR privateer entry was taken to third (+22.681s) at the checkered flag by factory driver Kevin Estre.

Tandy also endorsed the move to a qualifying race for this year: “It’s been really good for the Roar, actually, because it enables you to get some sort of testing in. But it’s relevant because everyone wants to start the Rolex from the pole position,” he said. “But we get to do it in sort of a pressure situation and run through our procedures.

“The car was great — we’ve obviously been working through our program as normal but even kind of working with the strategist and stuff like this isn’t something we expect to go through before our first race, even with a new program. It was nice to race with the other marques, and I’m sure it will be equally fun and probably a lot more close this time next week. It was a great start for me and Alexander (Sims) to kick off our time here with Corvette Racing.”

Adding to the theme of familiarity, the No. 96 Turner Motorsport BMW M6 GT3 claimed the win in GT Daytona, ensuring Bill Auberlen, Robby Foley, and their teammates will start from the GTD pole next Saturday. Pfaff Motorsports secured the outside front row in GTD for Pfaff Motorsports with the No. 9 Porsche 911 GT3 R driven by Laurens Vanthoor (+4.424s), and GRT Lamborghini Huracan GT3 driver Mirko Bortolotti was third in the No. 111 (+13.346s).

The most memorable action came late in the qualifying race as the lead in LMP2 was traded between eventual winner Mikkel Jensen in the No. 52 PR1/Mathiasen Motorsports ORECA 07-Gibson and Antonio Fuoco in the No. 47 Cetilar Racing Dallara P217-Gibson, who came within 10 minutes of giving the Italian constructor a first-place finish — albeit in a qualifying contest — on the model’s IMSA debut, but he was both passed and was forced to pit lane moments later for a long stop that dropped it from the lead pack.

Jensen crossed the finish line one lap ahead of the No. 20 High Class Racing ORECA and the No. 8 Tower Motorsports ORECA.

LMP3’s debut as the WeatherTech Championship’s fifth class saw the continuation of Muehlner Motorsports America’s strong performances as the No. 6 Duqueine M30-308 VK driven by Laurents Hoerr took the win and pole for the Rolex 24. Forty7 Motorsports’s Ryan Norman was one lap behind in his No. 7 Duqueine M30-D08 47 to hand the French LMP3 constructor the front row. Also one lap behind Hoerr was George Kurtz, who drove the No. 54 CORE autosport Ligier JS P320 to third.

Two of the 49 cars entered for the Rolex 24 did not partake in the qualifying race. The new No. 64 Porsche 911 GT3 R owned by Team TGM was kept in the garage to preserve the car, and the No. 74 Riley Motorsports LMP3 Ligier experienced electrical issues, according to the team, and was unable to participate.