Ed Jones was a happy man after turning his first laps in the NTT IndyCar Series since the season finale in 2019. The returning Dale Coyne Racing with Vasser Sullivan driver logged 86 laps on Tuesday in the No. 18 Honda at Barber Motorsports Park, and found a quick rhythm from inside the updated Dallara DW12 chassis.

“Things were pretty seamless,” the 2016 Indy Lights champion told RACER. “The aeroscreen, when I was seeing it in the shop, I thought it was going to take a little time to get used to. But once you’re out on track, you didn’t really notice it. And with the helmet fan and stuff, everything seemed fine. So, that was all good.

“It was nice to do quite a few laps since I hadn’t been in an open-wheel car since September of 2019. So, it was a long time, and it was just good getting back into it as quickly as I could and I can’t wait for the next test in Monterey.”

Jones and new teammate Romain Grosjean worked through a number of chassis setup ideas that offered varying results throughout Tuesday. They’ll get another chance to find more speed on Monday at WeatherTech Raceway Laguna Seca. 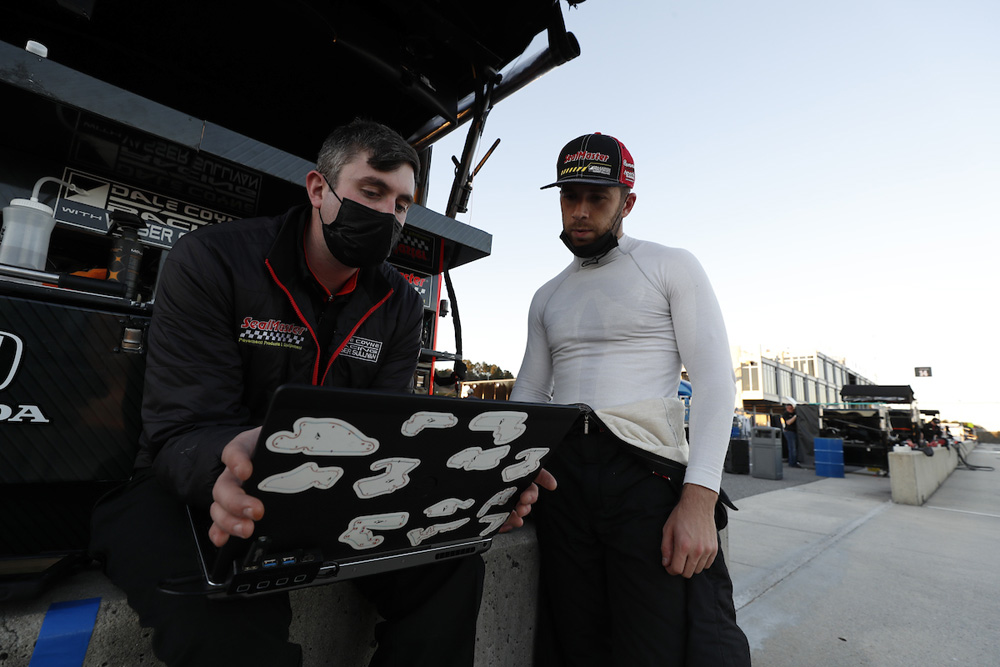 Jones and his new and old crewmates learned from what did and didn’t work at Barber, and he looks forward to putting it all to good use. Lumen Digital

“It definitely took a few rounds just to get in the swing of things, but we were pretty competitive in the morning,” he said. “However, on the other side, I think the adjustments we made kind of hurt us in the afternoon a bit, and we were playing catch-up. It was a good day, a challenging day, but we got a lot of changes done, which we learned from — which, again, is always the bigger thing about testing. So, I feel like we’ve got ourselves in a good position.

“And it’s really nice to be back with a team I’m comfortable with. There have been some changes, but it’s a team that’s very easy to get on with and be productive with. So, I’m really looking forward to the season and making some more improvements with the guys as we have these next few test dates.”

With three seasons of IndyCar experience to draw from, Jones ramped up his weight training and cardio endurance efforts in recent months to be ready for the rigors of wielding the No. 18 Honda at road courses like Barber. He says he came close to hitting his target and will continue the process as the first race of year — at the same track — looms in late April.

“Talking to the other drivers before this test, since the resurface at Barber, it’s become a lot more physical,” he added. “Everyone thinks it’s probably the most physical track on the calendar, just because of how heavy the steering’s got. And yeah, I definitely felt that. It’s for sure the heaviest I think I’ve felt steering an Indy car in the past. But fortunately, I felt fine, even at the end of the day.

“It was a bit hard on the neck for me, but otherwise I was pretty happy with how I felt, considering how long I’ve been out. It’s always tough, but I feel like I’ve had enough training in the off-season, and looking forward to doing a bit more and getting all the way there before we start racing.”