Design engineer Gabriel Elias recently returned to his native Florida after spending the past six years employed at Mercedes F1, where he helped to design the cars that have carried the team to the past seven Formula 1 constructors’ championships.

When I first began working in Formula 1, my perception of pre-season testing was probably the same as a lot of people’s. You imagine these teams having worked all winter on their new car, and then going to the track for this day of reckoning where they find out whether all that work has paid off with the performance they were expecting. That, and some trepidation about what the opposition has been up to during the off-season.

But the truth of the matter is that in my time at Mercedes, when we got to the first test, it was really just about mileage accumulation. We were trying to break the car. We already knew that there was performance, so the first test was essentially for validation.

As time has gone on the teams have become much more prepared for the first test, because they’ve seen the necessity of getting your mileage in the hybrid era of Formula 1. Mileage is basically gold to race teams — if you’re not able to go out in testing and get laps, you’ve screwed yourself. And we’ve seen that over the past few years, when teams have had problems during the first test, or missed days of it altogether because their car wasn’t ready. When that happens, you’re losing hundreds of kilometers per day that you need in order to be able to try different setups, different ride heights, different engine modes, different aero packages, all that kind of stuff. You can’t do any of that work if you’re not running, and recent history shows how big a setback missing that track time can be.

But while you usually arrive at the first test with a good sense of your own car’s performance, you never really know where you are in comparison to the other cars until you get there. All top teams have some form of performance tracker that basically follows and projects the performance of their closest competitors, normalized based on, say, engine mode. So in the case of Mercedes, if we were testing at the start of 2018, the team might say, “OK, Ferrari’s chasing us,” and we could take all the data points of their upgrades from 2017 as relatives to our car over the entire season. Then we would essentially project out that, OK, we think they’re going to bring four tenths – that’s just an example – to the car, because of the ruleset for that year, combined with historical data from past years and other inputs.

So we’d have an idea where the competitors are, but no one really knows until they show up. But as far as what Mercedes or any other good team will bring to the circuit, they’re going to be projecting out that, hey, we need to find, let’s say, one second in performance from the end of one season until the start of the next, assuming that the regulations stay fairly stable. OK, well we can gain two-tenths from the engine – we’ll call Brixworth (ED: home of Mercedes HPP) and say, “Can you give us 10 horsepower,” or whatever that ends up being. We need to find this many tenths in the wind tunnel, and the aeros will be making weekly gains as soon as the model switches over from the previous year to the next one, barring any setbacks. And then let’s say we can find a few tenths in mass optimization, vehicle dynamics-related updates, like that. So all of that is set as directives, and then developed in simulation. And that drives our design.

Then once we bring the car to the track, it’s almost like, “OK, we’re pretty sure we’re going to be here or hereabouts, now we just need to make sure that our competitors have followed the track that we projected for them as well.” So that’s what points the ship at the start of winter. 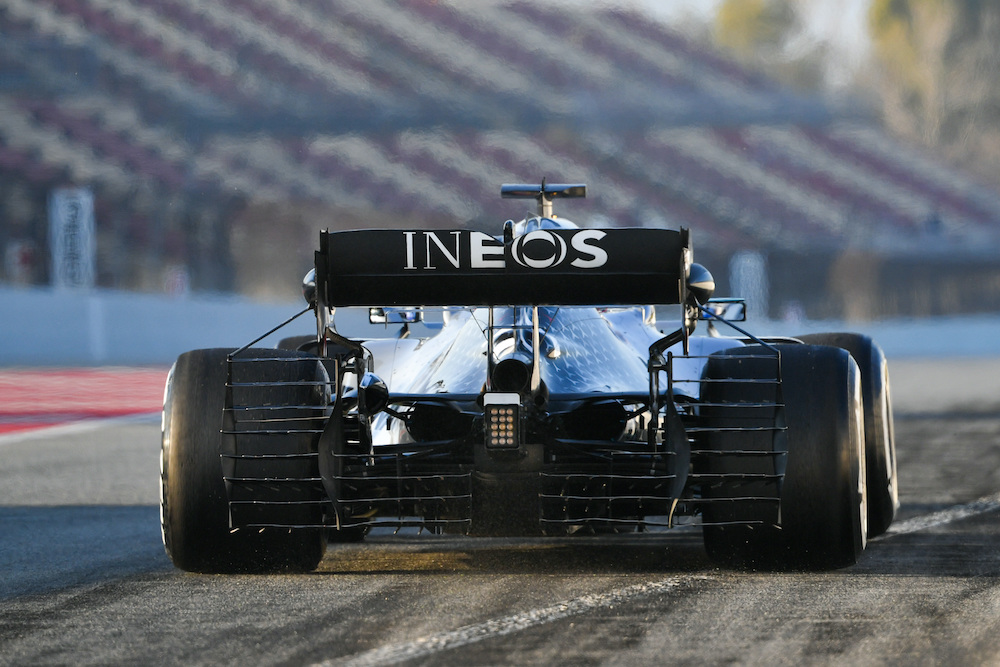 By the time the leading teams show up to F1 testing, they already have a pretty good idea where they – and their rivals – stand. The focus is largely on validating what simulations showed during the winter. Sutton/Motorsport Images

During my time with the team it was rare that one of our rivals came out with something that really surprised us, but there were certainly a couple of occasions when we all started looking at something another car was doing, like, “Whoa, that was gnarly.” A couple of years ago at Melbourne, we had an onboard of the Ferrari rear wing and we saw the thing diving — we could see flexing at speed on the straight. And we’re all sitting there like, “How the hell are they doing it?” We were looking at the hinge points at the main plane, as it attaches to the endplates, we’re looking at the rear flap…. It all seemed to be on a slider of some sort. And moveable aerodynamic devices are a no-no, but under speed you could probably get away with it, as some teams have done in the past.

That was one where I remember we looked at it really closely, like, “How can we do this?” We tried to scheme up some options that would maybe get us a similar result. But one thing about Mercedes in my time there is the team never brought questionable things to the car. They were always very, very afraid — and Daimler was always very afraid — of the optics of going too far into the gray area. I’m not sure that all of our rivals felt the same way, but Mercedes was very keen to avoid what would come with the kind of publicity you’d attract for doing something against the rules. If we brought something to the car that was novel, the technical management was certain they could prove its legality in the event of a protest before it ever went onto the track.

Ferrari gave us a scare another year when they were up by about a second a lap during pre-season testing. And internally, within the team, we were just like, “We are so screwed here.” I think that was when they were doing something with their engines, and they were showing it in different places on the track. Remembering the engineering notes, we ended up finding a ton of performance almost inadvertently, and it had to do with ride height. So we made a ride height change, and basically the car just lit on fire — figuratively — and we found massive chunks of time. And as I remember, that might’ve been the afternoon of the last day of the last test before Melbourne, and we found about half a second, just in ride height changes.

That year we also brought a ton of aero development during the season to try to make up for Ferrari having this engine mode that we couldn’t figure out. It was almost through sheer luck that we found something, plus the fact that we had superior reliability, which was always the calling card of our car, that we were able to get it done that year. That was a really tough slog of a year, because we just kept bringing parts to the car, trying to get more and more performance. I know that took a lot out of everyone.