Roughly a year ago, the 2020 WorldSBK Championship kicked off at Philip Island in Australia. That weekend, PATA YAMAHA WorldSBK Official Team member Michael van der Mark raced to four-four finishes atop his YZF-R1, and used the opening round scores as a springboard to an eventual fifth in the final standings when the series wrapped up at Estoril last October.

The day after the finale, van der Mark immediately went to work for new employer the BMW Motorrad WorldSBK Team.

“We are delighted to welcome Michael to the BMW Motorrad WorldSBK Team,” said Shaun Muir, BMW Motorrad Team Principal that weekend. “He brings a wealth of experience and is one of the youngest, most talented riders on the WorldSBK grid. Securing Michael’s services emphasizes the focus and determination we have to compete for top honors, and we will give Michael every chance to reach that goal.”

In other words, BMW, which first came to the WorldSBK battle front in 2009, is in it to win it in 2021. Romanced and inspired by the new BMW M 1000 RR, van der Mark left Yamaha behind to line up alongside new teammate Tom Sykes for the new WorldSBK race season. Currently locked down in Holland awaiting word on when he and the BMW team can get back to work with the striking new BMW M 1000 RR, van der Mark spoke about the shock move that caught the entire WorldSBK garage off-guard.

Q: You’re part of a new team and will be racing a new motorcycle when things get going. It must be frustrating to be waiting around and not posting up laps?

MICHAEL VAN DER MARK: Yeah, for sure. You know, normally we would have had the first race this weekend or next weekend in Australia. I don’t know how many years it has been for me to be off the bike for this long, or to start a season this late in the year. That’s really frustrating. Especially since Australia is always the first race and it’s a really nice event. It’s far away from home, but it is such a cool place to go to and it’s always a nice start to the season, and now we don’t know where we start or when we start.

Q: Have you been able to speak with any of the other WorldSBK racers?

MVDM: Yeah, I’ve had a lot of contact with Alex Lowes. He’s in Spain. He was supposed to be testing right now, and that was stopped. It’s the same all around. Everyone is ready and everyone is frustrated, but it is what it is.

Q: Your move to BMW for 2021 caused quite a sensation in the WorldSBK community…

MVDM: Yeah, and no-one saw that coming. Even I didn’t expect it. I never thought I would go there. For me, one of the big things was that everyone was getting a new bike, eve BMW, and Yamaha isn’t bringing a new bike. The bike is working really well now, but it’s more about the future, you know? I spoke with BMW and they said that they were bringing this M version. I spoke with the biggest boss of BMW motorcycles and he said to me, “We need to win and that’s it.” It was real positive. He loves the sport. When the president loves the sport, it’s a real good thing to have.

Q: BMW is very committed to both you and WSBK, isn’t it?

MVDM: Yes, they made a big step in their effort. BMW will also have two satellite teams with Eugene Laverty and Jonas Folger, and this is all to get more information. They want to move fast now. They want to make steps quickly as well.

Q: Was it a hard decision to leave Yamaha?

MVDM: Yeah, it was a bit strange, because I never thought I would make such a change. I went to visit BMW and I was confident, you know? I saw everything and I never had any doubt. I thought to myself, “Okay, I think I need to do this for the future.” Okay, we’ll have to see if I made the right choice, but I do feel like it was the right thing for me to do. It was also tough because I was enjoying it so much with all the people at Yamaha, and working with the team. I didn’t want to leave, but I thought it might be better for my future. 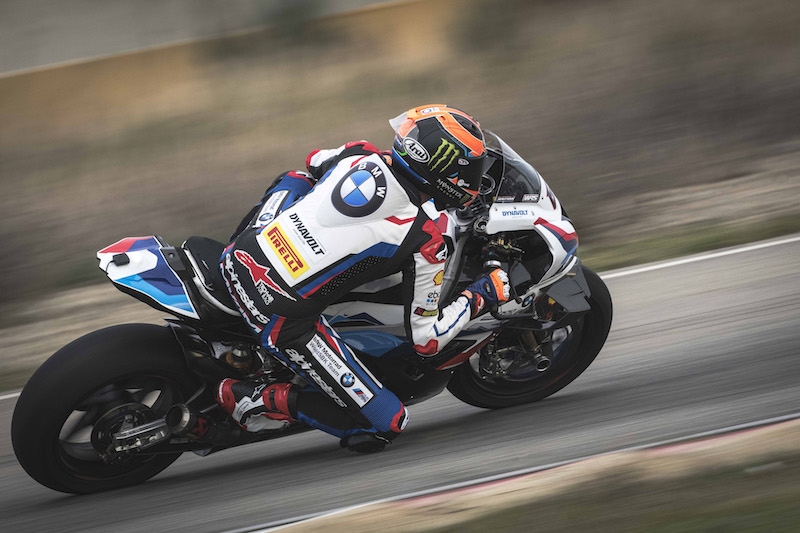 Q: You rode the BMW S1000RR the day after the final race at Estoril. Not long after, you put in your first laps on the new M 1000 RR at the Miramas circuit in France. Good first impressions?

MVDM: Yes, unfortunately I only had 20 laps on it at Estoril. It’s always good when the first feeling is good, and my first feeling on the BMW was good. And for the team it was good, and it was positive to see what my feedback was. I felt good with the bike. I was up to speed quite quick. The first feeling was good, and it is already a good start. You know, you ride a new bike and you’re not stressed and not thinking, “Oh, what have I done?!” I also tried the wings at Estoril, and the change is massive on the bike. You have to get used to it, for sure. They are a big improvement, and the bike is a lot more stable exiting corners. It’s all we need. The bike has more and more horsepower. We saw that when Ducati came with the V4. It had so much power yet, it was so stable in the exit. Yeah, I think it’s the future. Whether you like it or not, it is the future. I think on the M 1000 they look really cool. I have to ride a lot with the bike to see what works and what doesn’t. The bike turns very sharply. That’s something that is always nice when you dive into a corner and the bike will still turn. I’m really encouraged. It’s always good to dive into a corner and be sure about it.

Q: You’ll be teamed with Tom Sykes in 2021, and BMW will also back the Bonovo MGM Action team for Jonas Folger and the RC Squadra Corse for Eugene Laverty. Strength in numbers, huh?

MVDM: Yeah, I’ve known Tom for a couple years now and we’ve already worked together. Even at Estoril, he was there also and we worked together. I think all the riders with BMW have talent and they have the experience and they’re all going to be fast. I think it’s good to have four or five fast riders on the team.

Q: Can you and BMW be world champions?

MVDM: That’s the ultimate goal.I think with Superbike we have some top riders and some top bikes there, and I hope we make a step forward and we will be able to fight with them. We want to win and we want to be successful. We have no other option.