Jaguar is celebrating 60 years of the E-Type — which was known as the XK-E in the United States — by giving 12 cars a full in-house restoration that includes a handful of 21st-century updates. Sold exclusively in pairs, the six coupes and six convertibles are inspired by the cars shown in Geneva during the model's introduction in 1961.

Developed to replace the XK150, the E-Type was presented to the public and the press on March 15, 1961, at the Geneva auto show. Two examples made the trek from England to Switzerland: a gray coupe wearing registration number 9600 HP and driven by publicist Bob Perry, and a green roadster registered 77 RW put in the hands of official Jaguar test driver Norman Dewis. Both cars were driven to the event; the coupe arrived in Switzerland minutes before it was scheduled to make its debut, and the roadster was rushed to Geneva the following day.

Jaguar chose not to re-release either car. Instead, it will paint the six coupes in a special shade called Flat-Out Grey, and it will give the six convertibles a coat of Drop Everything Green. It pointed out that both colors were created specifically for the 60 Edition models, and that neither will be used on another car. Edition-specific emblems created by Jaguar's design department appear on the hood and on the fuel cap, among other parts. 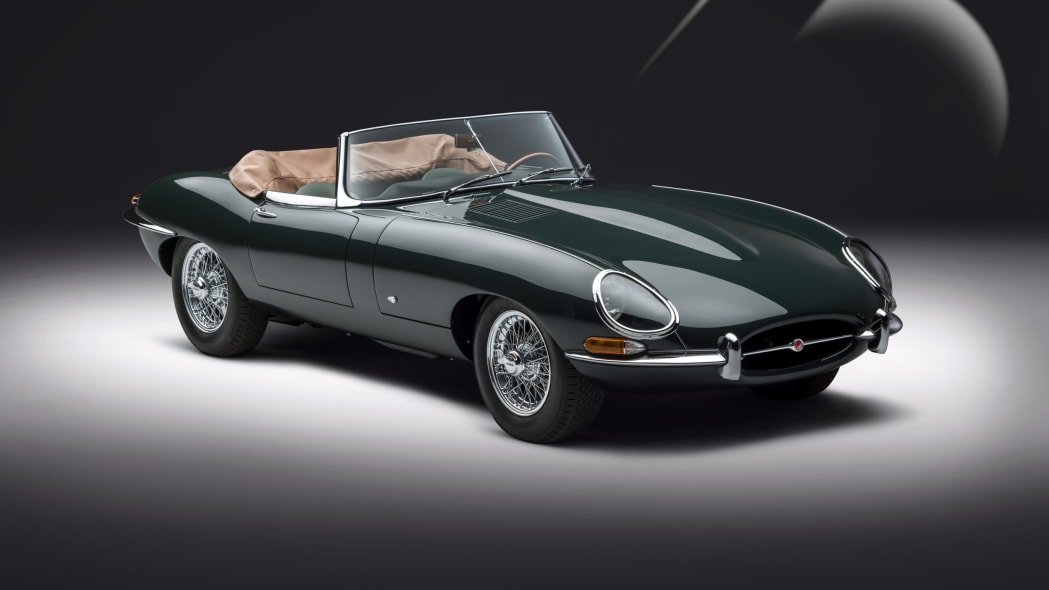 Sitting in the cabin is like traveling to the 1960s. The driver faces a wood-rimmed steering wheel with drilled spokes (and a non-original 24-carat gold horn button), analog gauges, and an array of switches on the dashboard. Coupes receive Smooth Black leather upholstery, while convertibles get Suede Green leather. Don't look for power windows or automatic headlights. You'll need to manually roll down the windows and turn on the headlights.

There's tech if you look, however. Jaguar concealed a modern infotainment system with satellite navigation and Bluetooth connectivity, for example. While that's available on any of the resto-modded E-Types the firm builds, the 60 Edition cars stand out from with an engraving of the route from Jaguar's headquarters in Coventry to Geneva, Switzerland, on the center console. It's created by hand in 100 hours by Johnny Dowell, who also goes by the name King Nerd. On the coupe, the engraving reads "I thought you'd never get here," words spoken to Perry by Jaguar founder Sir William Lyons after he arrived in Geneva. On the convertible, the phrase "drop everything and bring the open-top E-type over" is engraved. These were the instructions Lyons sent Dewis in 1961.

Power for the 60 Edition cars comes from a 3.8-liter straight-six engine, which sends 265 horsepower to the rear wheels via an updated five-speed manual transmission with closer ratios. Jaguar also installed an electric cooling fan, electronic ignition instead of points, and a stainless-steel exhaust system whose note is deeper than stock.

Build slots are still available, and Jaguar is encouraging buyers who want to add a pair of 60 Collection cars to their collection to get in touch with its classic department. The company told us that pricing information is confidential, but it hinted that each 60th anniversary car costs more than a regular resto-modded E-Type, which carries a base price of £315,000 (approximately $440,300 at the current conversion rate) when ordered with the 3.8-liter.

Jaguar is including a car cover, a tool kit, and a storage bag for the jack with each car. Additionally, buyers will be invited to retrace the route taken by Perry and Dewis in 1961 in the summer of 2022. The road trip will take them from Coventry to Geneva via some of the most scenic passes — and some of the best restaurants — in the Alps.