Bird (Jaguar Racing) got the better of polesitter Robin Frijns (Envision Virgin Racing) — his former teammate — as the two engaged in a race-long back and forth under the floodlights. A red flag five minutes from the scheduled end of the race brought things to a premature end, confirming the Briton’s victory.

Frijns got away cleanly from pole to fend off second-starting Sergio Sette Camara into Turn 1, and third-starting Bird immediately challenged the Dragon/Penske Autosport driver to make a tidy move stick for second up the inside of Turn 2.

On Lap 5, Vergne pounced on an error by Blomqvist to pinch sixth, with the Briton falling to eighth at the hands of the reigning champion a lap later. Meanwhile, Buemi and Cassidy diced for ninth, with the Swiss coming off best with a regulation pass into Turn 18 to set about hunting Blomqvist up ahead.

The lead pair had drawn out two seconds on Sette Camara in third, with Turvey running a collected race in fourth with Mueller kept at arm’s length. Meanwhile, the two DS Techeetah hunted in packs as the Frenchman jumped for the Attack Mode power boost with his teammate following.

Mueller was first to fall to Vergne on Lap 10, with the two-time Formula E champion on a charge. Turvey succumbed shortly afterwards as the DS driver climbed into fourth, now comfortably the fastest man on track.

Frijns was next to dive for his first mandatory Attack Mode activation and importantly, he was able to hold off Sette Camara to keep within touching distance of the new race leader Bird — the Jaguar driver still to use that initial 35kW boost, and take the pain of going off-line to cross the Attack Mode loop.

The Dutchman reeled in Bird and made it beyond the Briton into Turn 18, as the Jaguar made the dive for Attack Mode. It didn’t work out at all nicely for the experienced Formula E racer, though, with Bird also temporarily losing third spot to Sette Camara allowing Frijns to pull out a two-second gap on Lap 14.

Past the halfway mark, Vergne’s charge continued apace with another regulation pass for third, this time on Sette Camara, just as Jake Dennis (BMW i Andretti Motorsport) was crunched by Pascal Wehrlein’s Porsche, which prompted a full-course yellow to hold the cars as they stood at 50km/h until the circuit was cleared.

Bird had found his way beyond Frijns for the race lead just prior to that FCY, with the latter jumping for Attack Mode number two but once again, the Virgin racer was able to bite back — despite Frijns saying he was overconsuming energy over team radio.

Bird tried to return the favor, and with the leader having to go on the defensive, the two DS Techeetahs were brought into play with Da Costa now heading Vergne in third and fourth respectively with 17 minutes plus a lap to run.

On Lap 22, Bird did make that move at Turn 18 stick, while the two DS Techeetahs came to blows at Turn 21. Vergne came out on top in third but the pair of black and gold cars were now 2.2 seconds back from the leaders after their disagreement.

Two laps later, Bird headed Frijns by 0.8s and held onto that advantage through his second Attack Mode activation. Contact between Guenther and Evans at the chicane then also collected the Mahindra of Alex Lynn, whose car overturned and slid into the barriers, bringing out a red flag and the race to a premature end.

Lynn was transported to a nearby hospital for precautionary checks after being extracted from his wrecked car, although his Mahindra team said the driver was conscious. 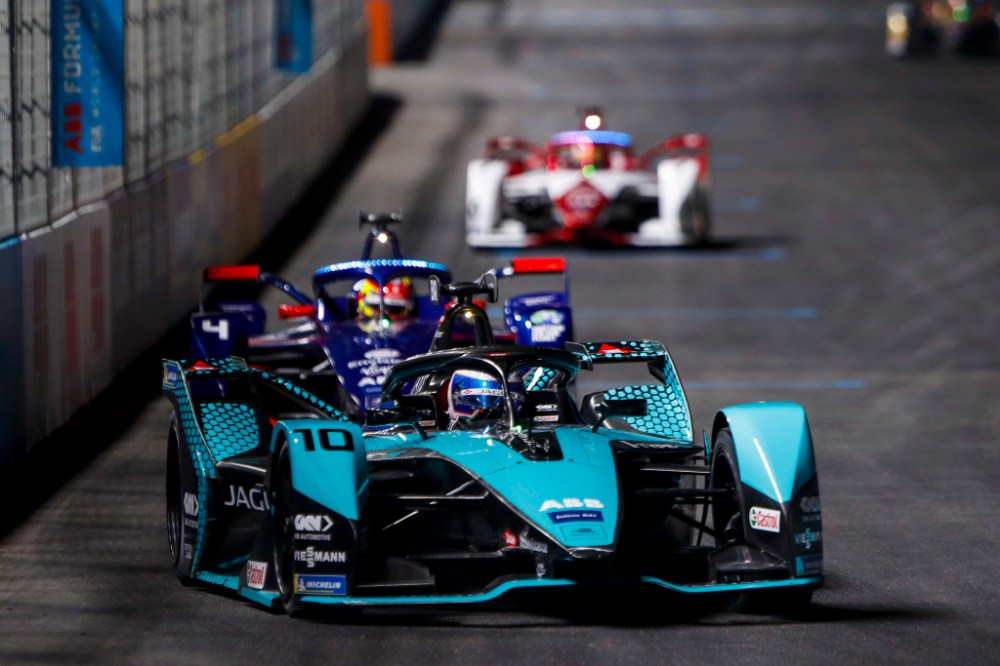 “I was a bit emotional in the car,” said Bird. “It was a big move and a big step for me moving away from what was my family in Envision Virgin Racing to join Jaguar Racing, but they’ve welcomed me with open arms and I’m pleased to deliver this win.

“The whole point of the opening two rounds was to come here and score decent points and if you’d said I’d come away with 25 points, I’d have taken that. Robin was so respectful and a pleasure to race against which is exactly what you’d expect of his caliber. It was really, really good.”

Bird’s last win in Formula E came 11 races ago on the championship’s last visit to Diriyah, and his victory in Round 2 this time around sees the Briton extend his unique streak of a race win in every season to-date. It also draws him level with Lucas di Grassi (Audi Sport ABT Schaeffler) in second on the all-time winners’ table with 10 victories.

With the Mercedes-powered Mercedes-EQ and ROKiT Venturi Racing drivers missing qualifying to rectify a braking issue, Nyck de Vries, teammate Stoffel Vandoorne and Venturi’s Norman Nato were forced to start from the back of the pack.

No more points in this one for the Round 1-winning Dutchman, but he leaves Diriyah still at the top of the drivers’ championship ahead of Bird and Frijns. Jaguar, meanwhile, leads the way in the teams’ running from Mercedes and Virgin.

The ABB FIA Formula E World Championship next heads to Rome, Italy on April 10 for Round 3 of Season 7.