Mercedes has unveiled its new car – the W12 – that will compete in the 2021 Formula 1 season, but admits it has hidden a number of developments.

The defending champions released imagery of the 2021 car before a live broadcast on Tuesday morning, with Lewis Hamilton present in a team event for the first time since signing a new one-year contract over the winter. Hamilton joined Valtteri Bottas and Toto Wolff as the car was revealed, with a slightly updated livery featuring the black base introduced last year fading to silver AMG branding on the engine cover.

However initial renders offer few technical giveaways, and Mercedes technical director James Allison said the team is keeping the majority of its development work under wraps.

“What’s carried over will look different from team to team, because the rules didn’t require you to carry over the same things,” Allison said. “The rules freeze a large chunk of the car, but then give each team two tokens to spend on changing their car. Along with the tokens comes a shopping list showing how many tokens are required for each change. How teams decided what to use their tokens on was entirely up to them.

“In addition, there are some parts of the car that you can change token-free, for example the power unit, the cooling systems, the suspension and of course all of the aerodynamic surfaces. We have spent our tokens, but we won’t reveal how we used them just yet. That’ll become clear in good time.”

The launch car featuring a dummy floor, and Allison said the team’s solutions in certain areas are being hidden until testing to prevent its rivals getting time to try and analyze its aerodynamic concepts. 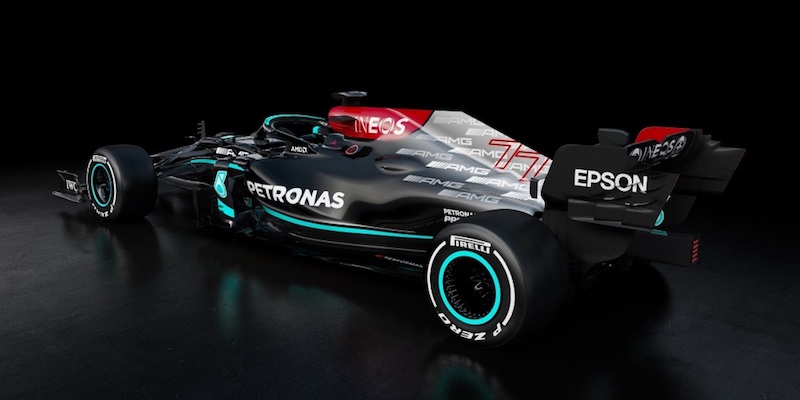 “Across the whole car it is actually dressed in new clothes, new aerodynamic finery, that we hope will make it a successful car,” he said. “The bit we’re not showing you is down along the edge of the floor. That area is the area that was most affected by the new regulations where they tried to pull performance away from the car by changing the floor regs.

“Down there there’s a bunch of aerodynamic detail that we’re not quite ready to release to the world, not because it’s not there but because we don’t want our competitors to see it, we don’t want them trying to put similar things in their wind tunnels. It just buys us a couple of weeks extra.

The Mercedes unveiling is the first of five events this week, with Alpine also launching its new look on Tuesday afternoon. The former Renault team will be without Fernando Alonso for the launch, as he is unable to travel to the UK from Switzerland without self-isolating for 10 days and is not joining remotely.

The first Aston Martin to race in F1 for 60 years will appear on Wednesday, before Haas launches its 2021 livery on Thursday and Williams unveils the FW43B on Friday afternoon.