The words “Andretti” and “Ferrari” just sound good together, and 50 years ago this weekend, they were best of the best in South Africa.

In only his 10th start over four fractured seasons, Andretti scored his initial Formula 1 victory at Kyalami on March 6, 1971 driving for Ferrari; and it helped change the trajectory of his amazing career.

“That was a big moment, one of those I’ll always cherish,” said the 81-year-old legend on the eve of that milestone. “Kyalami was a fun circuit to drive with lots of elevation changes and Ferrari gave me equal equipment to my teammates. It was a good weekend.”

Jackie Stewart was on pole for the South African GP in a Cosworth-powered Tyrrell next to Matra’s Chris Amon, with Clay Regazzoni and Mario comprising Row 2. Regga and Jacky Ickx (eighth) were also in Ferraris.

“It was a good battle between Stewart, (Denis) Hulme and myself with Regga and Ickx close by,” recalled the man who would go on to win 12 F1 races, 17 pole positions and the 1978 world championship during that decade. “Denny was leading and blew up and I took the lead and Jackie couldn’t catch me, so that was my first win.

“You’ve got to have a feeling that you belong and that was extra special because it was with Ferrari.” 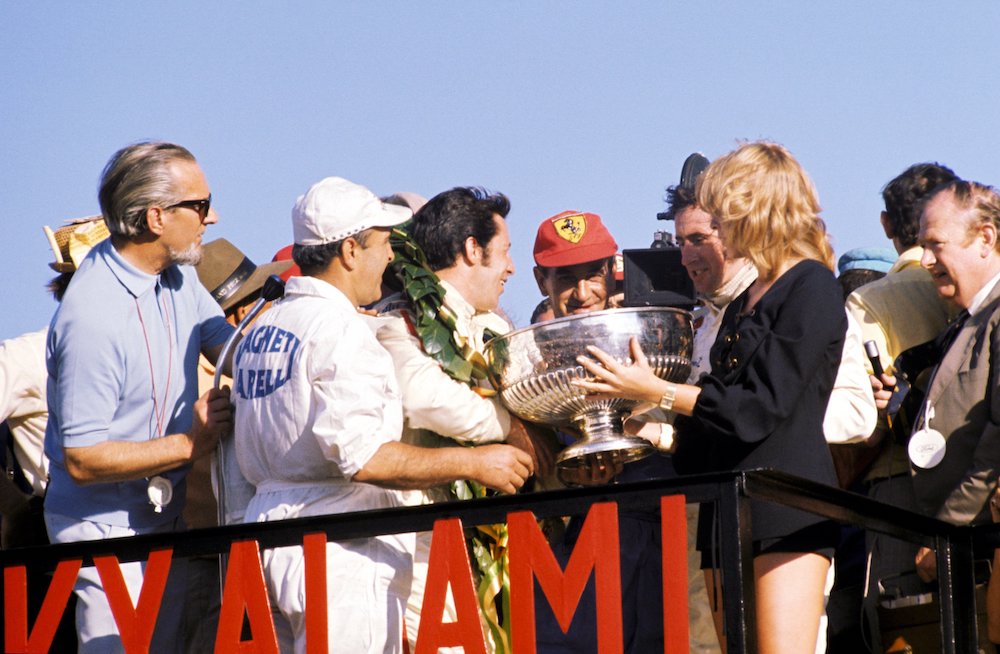 Two weeks later, Andretti captured both heats of the Questor Grand Prix at Ontario Motor Speedway — and got a call from il Commendatore.

“Mr. Ferrari called and made me a pitch to be his No. 1 driver,” said the 1969 Indianapolis 500 winner. “But F1 didn’t pay much back then and my contracts and commitments were so lucrative over here I couldn’t give that up for the security of my family. The timing wasn’t right yet, so I had to turn him down; but I always figured I’d get another opportunity.”

Of course that came in 1977 when he struck a deal with Colin Chapman and helped develop the ground-effects car that carried him to the ’78 F1 crown. But Andretti got another call from Ferrari at the end of ’77.

“I’d won the final race of the year at the Italian Grand Prix and Mr. Ferrari wanted to talk. I had a handshake agreement with Colin and he’d already agreed to pay me what Ronnie Peterson was making, which was the highest salary in F1. So I asked Mr. Ferrari what was he willing to pay me.

“He said, ‘You know, Mario, I can’t put a price on your talent so you tell me.’ That SOB threw it right back in my lap,” said the four-time IndyCar champion with a laugh. “Well, (wife) Dee Ann was sitting next to me and I asked her what should I do and she said ‘double it.’ And Mr. Ferrari agreed.

“The next day I got a telex from him saying ‘Let’s just leave things alone’ because he’d just had a visit from Colin (who’d) followed me to Maranello and raised hell with Mr. Ferrari. Can you imagine? So I told Colin he’d always been good to me but you don’t want an unhappy driver. Then I told him I wanted $10,000 a point — you got nine points for a win back then — and he had to agree.”

Only the second American to win the F1 title, Mario went back to IndyCar racing full-time in 1981 and captured the 1984 CART championship.

But his goodbye to F1 was just about as sweet as his beginning: He won the pole for Lotus in his 1968 debut at Watkins Glen, N.Y. and claimed the top spot in qualifying for his last F1 race, the 1982 Italian GP at Monza — in a Ferrari.