It’s been a minute since a single model has caused this much attention to be cast on it due to crash test scores, but here we are with more news on how safe the 2021 Nissan Rogue is.

Nissan just announced its intention to retrofit 2021 Rogues made before January 28 with new equipment to better protect the passenger in a crash on account of a two-star front passenger-side NHTSA crash test rating. Nissan told us that "the changes include updating the passenger air bag module, replacing the front passenger seat belt and updating related software." A second test will be run with these updates in May.

Mere hours after this announcement, the Insurance Institute of Highway Safety released its crash test findings for the new Rogue. It received the highest possible honors, as the IIHS awarded it with a Top Safety Pick+ rating. 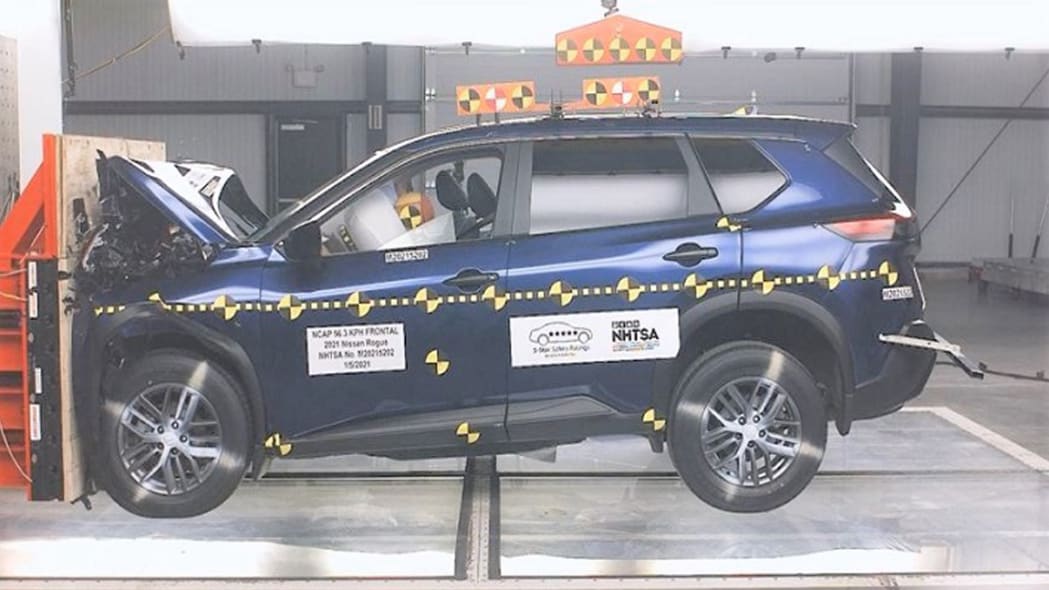 We queried Nissan to find out if the Rogue used for IIHS testing had the fix applied to it, and a company spokesperson informed us that it did not. That would mean the IIHS and the NHTSA were testing the same spec of car, but came to different conclusions.

Varied results from crash test scores between the IIHS and NHTSA are not unusual — different methods and strategies are used by both organizations — but the large gulf between the two is still enough to raise our eyebrows. Joe Young, an IIHS spokesperson, pointed out that the tests it performs are not equivalent (and observe different outcomes) than what the NHTSA tests do. For example, the IIHS front crash test ratings are based on "structural intrusion, dummy injury measures and dummy kinematics," while the NHTSA test focuses only on restraints and injury measures taken from the crash dummies.

"I don’t know exactly what led to NHTSA downgrading the passenger rating, but I can say that we didn’t observe any deficiencies in the passenger-side small overlap front test," Young told us.

Every test the IIHS observed returned the maximum “Good” rating, including all frontal crash tests, which is the area that tripped up the Rogue in the NHTSA test. Not only did the Rogue ace all IIHS crash tests, but it also received a Good rating for its standard (and only option) LED headlights. Full marks were given for front crash prevention testing and ease of use for the child seat anchors, too.

We’ll update this post as we learn more. According to the IIHS, though, the 2021 Nissan Rogue is as safe a vehicle as its testing can measure.