Pato O’Ward’s No. 5 Chevy and Felix Rosenqvist’s No. 7 counterpart feature familiar colors from the 2020 season, but both cars have undergone styling changes, and in the case of the Swede’s entry, a greater use of blue will make it easier for fans to distinguish one car from the other.

“The whole Arrow McLaren SP team are excited to reveal these new liveries to the fans, our partners and the media,” said team co-owner Sam Schmidt.

“It was great to work with Arrow Electronics, Vuse and McLaren to create two cars that represent not only the team, but the look of each partner as well. I’m very proud of the work that this team has put in during the offseason and I can’t wait to see the fruits of the those labors take to the track at Barber. Let’s get these cars on track and get racing.”

O’Ward’s car continues to carry primary branding from Arrow Electronics, and in another change for 2021, Vuse has taken top billing on Rosenqvist’s machine. 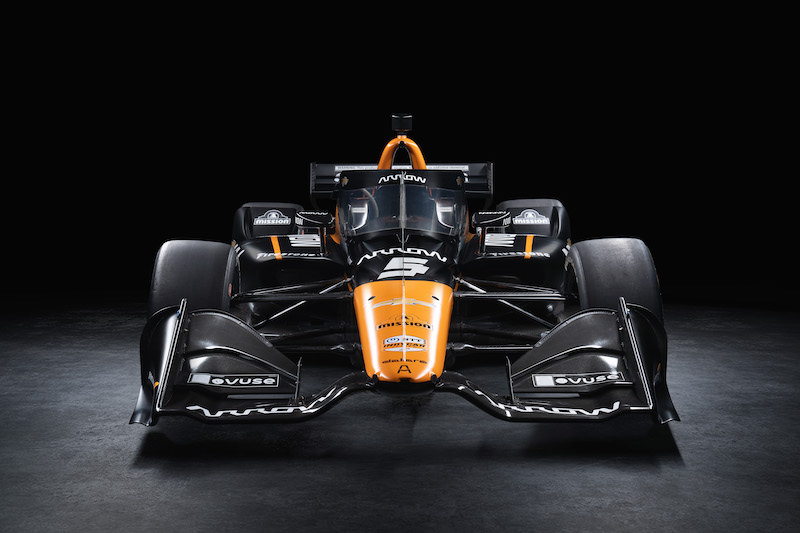 “I’m excited to see what everybody thinks of the new liveries,” said O’Ward, who finished fourth in the championship on his debut with AMSP. “I think both of the cars represent a great mix of all of the colors of Arrow McLaren SP. Felix’s car has more blue and mine has more black, which I think will be easier for the spotters to be able to tell our cars apart. I think the Arrow McLaren SP Chevrolets came out really cool. My car looks very similar to last year, with a few minor tweaks, but I think it looks fast! It looks ready to race.”

Rosenqvist has been eagerly anticipating the unveiling of his first AMSP livery after joining the team during the offseason.

“When I first saw the No. 7 Vuse Arrow McLaren SP Chevrolet in real life I was so stoked to see how good it looked,” he said. “If it is as half as fast as it looks, I think we’re in for a great season! I really like the blue mixed with the classic McLaren color of papaya. We are a great team full of ambitious people and we’re all ready to take it up a notch this year. I’m ready to go.”