Other than wanting back Turn 6 of the Daytona road course, Kyle Larson is pleased with the start of his season.

Larson has two top-10 finishes in the first three races and feels he’s contended for the win each weekend. Or he could have competed for the win on the road course had he not spun himself out late in the going. That has been the only blemish on his result sheet.

“I’m happy with it,” Larson said this week. “New team and new faces. I haven’t been in a car in a long time, and to be as strong as we’ve been throughout the whole race at every race has been really good. So, I’ve been happy.”

Suspended by NASCAR and then fired by Chip Ganassi last spring, Larson only contested four races in 2020. Returning to the Cup Series circuit during Speedweeks at Daytona, Larson was surprised he didn’t have the cobwebs or rust he expected. But with how much he raced on dirt a year ago, Larson felt as fresh as ever in a race car.

Everything from putting on his HANS device to shifting gears and coming down pit road and stopping on his pit sign has felt normal. Part of Larson’s preparation for his transition back into NASCAR racing has been looking over data and in-car videos and even jumping on iRacing.

“I really don’t feel like I’ve offered a whole lot in the debriefs other than just talking about my race and my race car, but maybe the crew chiefs and engineers can listen to me talk and get a lot out of it,” said Larson. “But I haven’t like offered any advice or what I think we need or anything like that. I feel like we’ve done a good job, and I’m really just trying to learn everybody. But I do think me coming from a different team and being able to talk about what I’ve previously felt…. I think that can kind of help them know that they’re on the right path and stuff like that.

“I think as we get more races into the year, I’ll be able to offer a little bit more, but I’ve been comfortable with everything. I feel like I’ve been comfortable communicating with everybody in the race shop and all the teams and not afraid to ask questions and stuff like that. So, it’s all been really good, and nothing has felt out of the ordinary.” 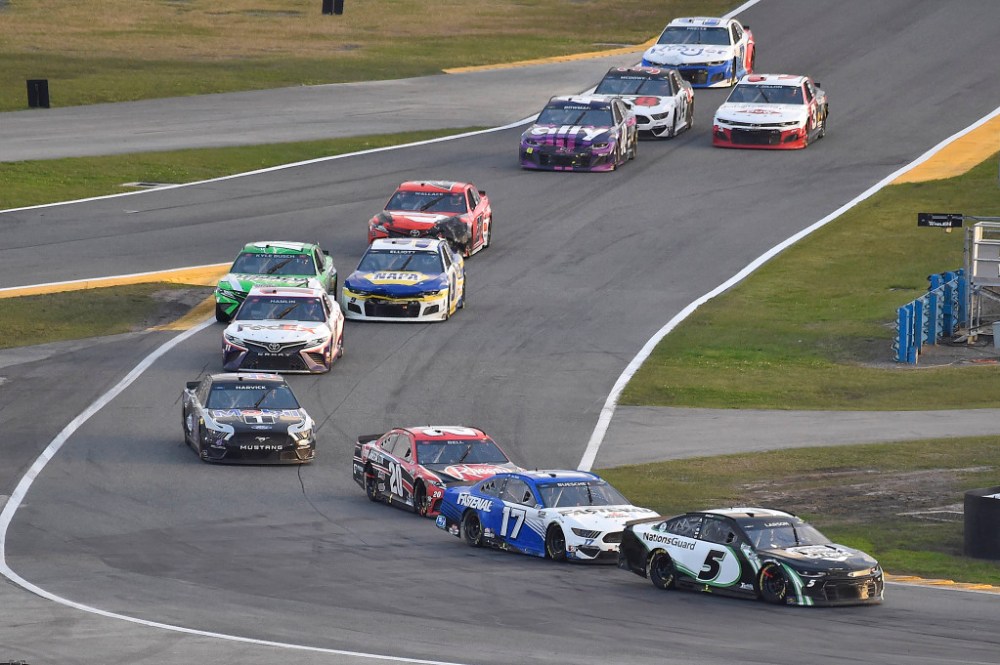 Larson credits the resources of Hendrick Motorsports as well as his own homework with enabling him to compensate for lack of track time both last year and this one. Rusty Jarrett/Motorsport Images

Preparation and homework have helped Larson. By the time he arrives at the track, Larson feels ready to go because of the work he’s putting in. And while most of that preparation is no different from years past, Larson is just doing it more.

“You look into it a little deeper,” he said. “I would always look at data and watch the previous race and maybe get on iRacing, but I always knew I had a couple of hours of practice to where I would figure it out once I got there. Where now, I feel like I’ve put in probably twice as much emphasis on studying that data because you don’t have a couple of hours to figure it out and time to debrief and talk to your teammates and stuff like that. So, you’ve really got to be as prepared as you can be going to the racetrack and being ready to go, so you’re not out to lunch at all in the first stage, or anything like that.

“It’s shown. I had never made a lap at the road course in a Cup car before that event, and I felt like I was able to move forward right away. Definitely, all the resources that I’ve had to look at have benefited me. I’ve just got to continue to stay hungry and keep studying, and I think we’ll have some more good runs.”