In reaction to the new August 21-22 date for the 24 Hours of Le Mans, IMSA has moved its Michelin GT Challenge at Virginia International Raceway off of the same weekend to assist WeatherTech SportsCar Championship teams and drivers with a desire to compete in the French endurance racing event.

As a result, shifting VIR will have a cascading effect on IMSA’s 2021 schedule as the GT-only weekend will take the October 9 date held by Motul Petit Le Mans at Road Atlanta. With VIR moved to Oct. 9, IMSA’s former season finale date jumps to November 13, extending the season by just over one month.

“Given the momentum we are carrying in regard to television viewership, it is important for us to preserve live, NBC network windows,” said IMSA President John Doonan. “Holding our season finale in November proved successful last year in Sebring, and we have every reason to believe we can be successful again this November at Michelin Raceway Road Atlanta. As always, we are grateful to all of our stakeholders — and particularly our promoter and television partners — for their flexibility and understanding as we maneuver through these changes.”

NBC will go live for the 2h40m Oct. 9 race at VIR, and add three hours of live coverage during the 10-hour championship closer at Petit Le Mans on Nov. 13. 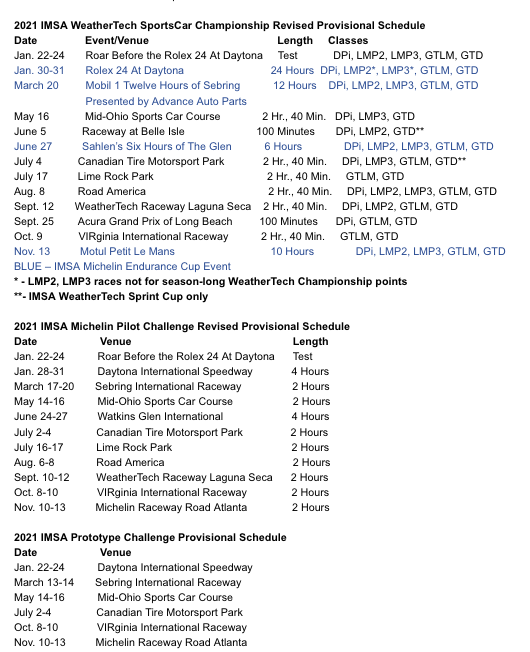