It is no secret that Formula 1 can be as exciting as it is ruthless. So is path to get there.

For Jak Crawford, the journey hasn’t disappointed as he climbs through the ranks of the junior formula categories. And now, with budget concerns ruling Logan Sargeant out of competing in Formula 2 for 2021, there’s a singular focus on Crawford as America’s leading F1 hopeful.

In his maiden European racing campaign last season, Crawford validated his place in the Red Bull Junior Team development program. While driving for Van Amersfoort Racing, the Texas native racked up five wins, 12 podiums and four poles in 21 starts in ADAC Formula 4, and finished runner-up by a narrow two points in the championship. Additionally, he captured two victories, seven podiums, along with one pole and finished sixth in the Italian F4 championship despite missing six races due to conflicting race weekends in Germany.

Those performances were rewarded with a pair of F3 tests at Barcelona and Jerez, along with handling an older GP3 car in tricky wet conditions at Portimao. Crawford showed enough to Helmut Marko, advisor to Red Bull Racing and head of its driver development program, to warrant a promotion to Formula 3, where he will drive for Hitech GP.

“It’s quite a big step,” Crawford tells RACER. “It even surprised me a little bit when I first tested the (F3) car, how quick it was. The downforce levels are so much more than I could have ever imagined. The speeds you can carry, how late you can brake. It’s pretty insane, but you get used to it after a while. In terms of expectations, they’re not too high. I think I’ll do quite well. The main thing is just beat my teammates (Ayumu Iwasa, Roman Stanek). They’re my best judgment. I think just outperforming my teammates, I’ll be quite happy.”

While the jump from a regional series to a global one – serving as an undercard at seven F1 rounds – is sizable, Marko is confident Crawford is capable.

“We know that the ADAC and Italian F4 series are usually strong and that was the case last year,” says Marko. “So, it makes sense to promote Jak to another strong series when we believe he is capable of making the move. It is a very significant step, but it will be a good test for him.”

Marko also believes this current crop of young drivers in the Red Bull Academy “could well be as strong as we have ever had,” but they all require continued growth. For that reason, he was reluctant to single one out from the crowd.

“Jak had a great 2020 season,” says Marko. “It was everything that we could really expect. He learnt a great deal, showed competitive spirit and natural ability. These are young drivers and all mature at different rates so it is meaningless to compare them over one season. Suffice to say we are very happy with Jak.”

Perhaps the most remarkable part of this entire scenario is that Crawford is still only 15 years old. He won’t turn 16 until May 2, which is just five days prior to the season opener at Barcelona.

While youth can sometimes equal a lack of maturity, Oliver Oakes, team principal at Hitech GP, believes that Crawford has the right mentality to get on with it.

“What I have seen so far with Jak in the four days he did with us post-season was just a clear desire to go for it, and the way he progressed those four days just reaffirmed to me he can manage that jump as a 16-year-old,” says Oakes. “Aside from being one of the top rookies in the tests, it was the way he found his feet inside the team, with understanding what he needed from the car and his engineer, you can tell he will be able to handle it. 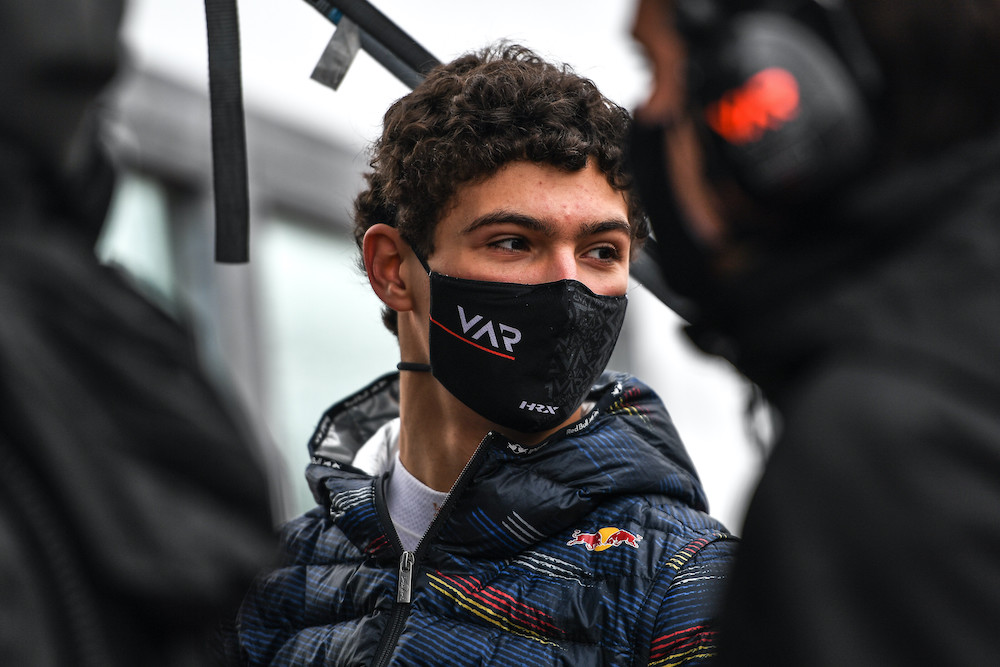 Crawford will turn 16 a few days prior to the F3 curtain-raiser at Barcelona, but Hitech team principal Oliver Oakes doesn’t consider his youth to be a disadvantage. Red Bull Content Pool

“We saw the first test (Barcelona) was tricky for him – to jump from an F4 car to an F3 car… the weight, the aero feel – particularly in high speed. Rather than it fazing him, he got on top of those areas in the second test and really showed he can take on board where he needs to improve without it fazing him. That will be a key trait in an ultra competitive field where it is never plain sailing with 30 cars on track and reverse grid races!”

Crawford joins a squad fully capable of producing wins and podiums. Last season, the UK-based outfit finished fourth in the teams’ championship, with Liam Lawson – another Red Bull junior – capturing three wins, six podiums and one pole to end up a respectable fifth in the driver’s standings. Lawson remains with the squad in the step up to F2 this year, which proves there is a possibility of an extended run with the team for Crawford should the results merit a second promotion in as many years.

With Hitech GP being something of a pipeline for Red Bull’s driver development program, Oakes has witnessed firsthand the depth of Marko’s interest.

“Red Bull is heavily involved day to day,” says Oakes. “It amazes me how Dr. Marko follows each junior so closely – even on F1 weekends, which naturally you think he must be super0busy with other stuff – but he is the first one to catch up with me post-race. Obviously, it is well documented that they have high standards and can be pretty ruthless, but the proof is in the talent they have brought to F1, and I think you cannot dispute that. Time and time again, Dr. Marko proves he is the best in the talent scouting business with (Max) Verstappen and now Yuki (Tsunoda), too.”

There will be plenty to evaluate for Marko with the unique weekend format for F3, which will consist of one 45-minute practice session, a 30-minute qualifying round and a trio of races. The lone qualifying session will set the field for the third race, which will take place on Sundays. Saturday will feature the opening two races, with the first race’s starting grid being a reverse of the top 12 in the qualifying bout. The starting lineup for the second race will be decided by inverting the top 12 finishing positions of the first race.

There are numerous spectacular stops on the calendar, including trips to Spa-Francorchamps and Zandvoort. Without a doubt, though, the one highlighted by Crawford is the trip back home at Circuit of The Americas, which also serves as the season finale (Oct. 21-23).

“Yeah it’s pretty cool they decided to have an overseas race at the end of the season,” says Crawford. “Usually for F3 they keep it in Europe, but they decided to go two and a half hours away from my house. So that’s nice. I’ve actually never been into the track yet. I’ve never driven on it. Hopefully, I can get some test days in. I think it’s a very important one to win. It’s in front of everyone, really. It’s also the last weekend of the season, so I think you really want to win that one.