Nitro Rallycross has unveiled the schedule and broadcast plans for its inaugural season as a standalone championship series.

In addition to going bumper to bumper against each other on NRX’s massive courses, drivers will have to contend with an extreme range of conditions – from the dry desert and towering mountains of the southwest to the lush wetlands of the southeast – showcasing extraordinary backdrops at every turn. The racing will be packed into short-form battles pitting drivers against one another head-to-head in 600 HP supercars capable of accelerating faster than a Formula 1 vehicle.

“It is so awesome to see the momentum building for Nitro Rallycross,” said series spearhead Travis Pastrana.

“The reaction from teams has been fantastic. We’ve already confirmed more supercar entrants than ever before in an NRX event. Building four all new, unique and crazy tracks for this year to go along with Utah Motorsports Campus is something all of us have been working toward for years. It’s going to be round after round of new challenges and excitement.”

Joe Carr, CEO of Thrill One Sports & Entertainment, parent company of Nitro Rallycross, said: “We truly believe that NRX is the future of motorsport and our 2021 series will usher in a new era of rallycross in North America and beyond.” 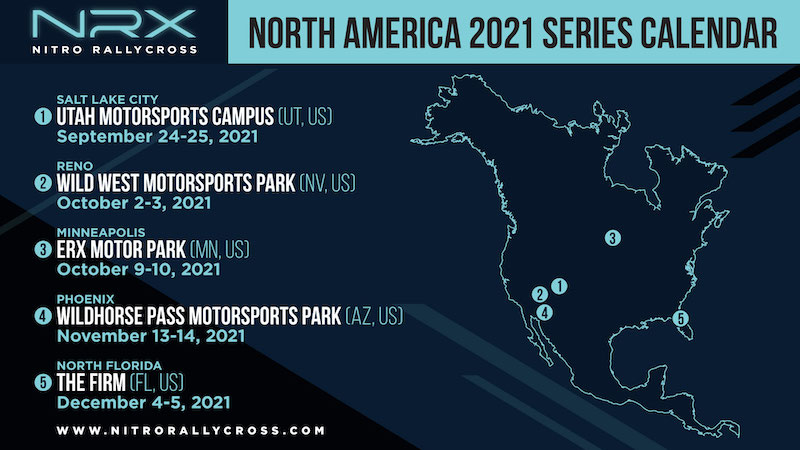 Each stop will also include a separate NRX NEXT competition to provide the next generation of emerging talent an opportunity to hone their skills in this pioneering new motorsport discipline. Drivers from both ranks will also have the opportunity to train on NRX’s cutting-edge courses year-round, ramping up progression further still, since all tracks will be a permanent addition to each facility.

Pastrana explains why these steps are so crucial. “With Nitro Rallycross, we are looking to redefine what’s possible and to do it as safely as we can. Pushing the envelope on such unique and high-flying courses requires time and practice. Now, having access to these tracks gives teams the chance to test the new jumps, learn more about the different surfaces and find new lines, ultimately giving drivers the confidence to open it up on race day.”

Nitro Rallycross’ opening season marks the first leg of the property’s planned global expansion. A 10-race series will follow in 2022, featuring a winter race in Canada to add ice and snow to the conditions the drivers will face. Additional races will follow before the action shifts across the Atlantic to Europe and the Middle East. Next year will also mark the introduction of a transformational electric SUV supercar class.

Foundational partner Red Bull has extended its multi-year alliance with Nitro Rallycross while another foundational sponsor, Yokohama, also returns, expanding its involvement to become the official tire partner for the series. Subaru Motorsports USA – which has participated in NRX from the beginning, fielding legendary drivers like Travis Pastrana and Scott Speed – is now joining as a series sponsor. Returning sponsor O’Reilly Auto Parts has also significantly increased their commitment.

All events will be broadcast live on Peacock for free. Eight hours from every North American stop will be streamed on NBCU’s new streaming service. In addition, a one-hour highlight show will air after each race on NBCSN.

“With our fans being predominantly young and digitally-savvy, a streaming leader like Peacock is the perfect home for us.” Joe Carr says. “We are excited to partner with NBCU across both their streaming and linear platforms for our 2021 season.”

Globally, Nitro Rallycross will be distributed in over 140 countries and has secured partnerships with Tencent, beIN SPORTS and SuperSport, with more to be announced soon.

Details on how fans can purchase tickets to experience Nitro Rallycross in person will also be announced soon.