FIA World Endurance Championship title winner Kamui Kobayashi welcomes the idea of racing in the NTT IndyCar Series. With 75 Formula 1 starts to his credit and an ongoing presence in the Japanese Super Formula series, the factory Toyota Hypercar driver has amassed a considerable amount of open-wheel experience.

And as a two-time overall winner of the Rolex 24 At Daytona in his first three starts with Cadillac, Kobayashi’s had a chance to co-drive with six-time IndyCar champion Scott Dixon and 2019 Indy 500 winner Simon Pagenaud, who’ve raved about his talent. With the possibilities of a few seats opening up in the near future, the road and street course specialist could be a fascinating proposition to consider.

“Yeah, of course,” Kobayashi told RACER of his IndyCar interest. “I’m still doing the Super Formula series in Japan and this car is made by Dallara, so I think the car would be quite similar. It’s different weight, different tires, different engine, but of course I know how Dallara makes its chassis, so I’d be pretty confident. 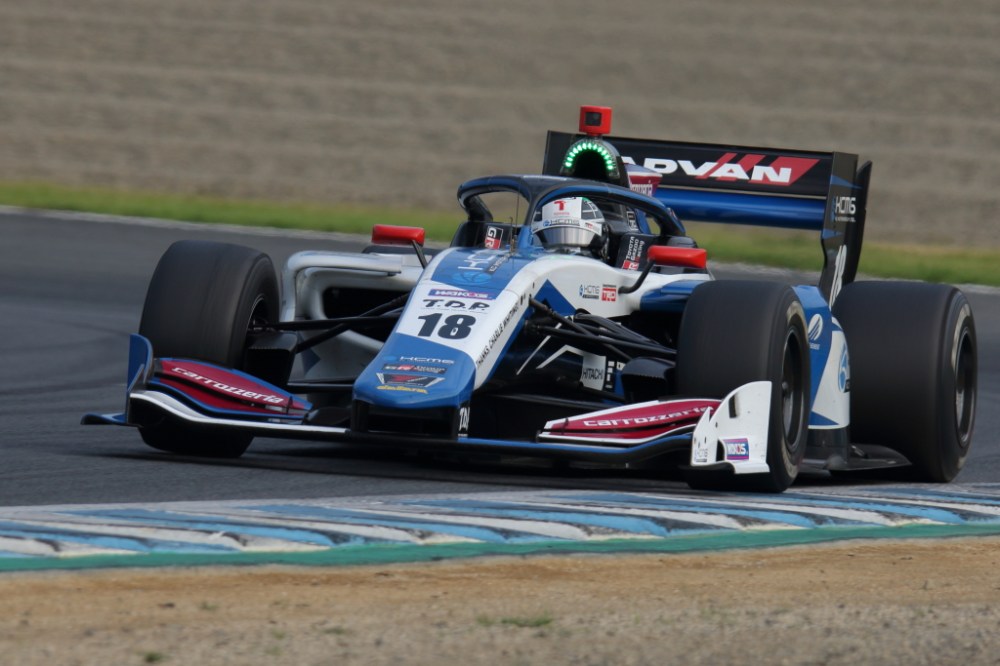 Kobayashi reckons his experience with the Toyota-powered Dallara SF19 Super Formula car could cross over well were he to get an opportunity in IndyCar. Yasushi Ishihara/Motorsport Images

“Driving for Toyota, I can have some opportunities to drive for Cadillac if there aren’t any scheduling [issues]. But for sure, to have the opportunity, I would be very excited to join IndyCar because it is a really huge race series. I know that there’s a lot of good drivers. Definitely, it’s a very competitive championship.”

Pagenaud loves the idea of seeing his IMSA teammate lined up on the IndyCar grid.

“You can tell he’s been working with very strong teams, the very best, for a long time,” the 2016 IndyCar Series champion said. “But what I appreciated the most about him is his straight-to-the-point attitude. No BS, no trying to sugar-coat it, he just tells you how it is. Just gets to the point right away in two words on what the car needs and it’s done and he moves on to the next thing. I think he’d be a lot of fun to watch.

“Right after I moved on from Formula Renault, he was with Prema, sponsored by Toyota, in Formula Renault Euro Cup and he crushed everybody. He was just incredible. And his driving style already showed the same thing you see today. Obviously, it’s a lot more polished now, but he was doing some incredible things that others couldn’t do. Just very committed in general with great car control. A fun guy to work with and a very, very good teammate. Great attitude, and just a racing warrior.”

The reigning WEC LMP1 champion has a reputation for attacking without relenting, which has made for a growing number of impressive performances throughout his career. And at 34, Kobayashi would fit the recent trend of veteran drivers from other series stepping into IndyCar.

“Scott Dixon, I’ve driven with him last year; I don’t know how many times he won the championship…I don’t feel he’s losing performance; he’s improving,” he said. “So. I’m quite big fan of open-wheel, and IndyCar would be a good opportunity. There are many drivers coming from many championships, and I bring a lot of experience, with Formula 3, Formula Renault, GP2, Super Formula and Formula 1. IndyCar would be the newest one.”

Due to the direct rivalry between IndyCar engine supplier Honda and its Japanese adversary Toyota, Kobayashi’s best chances reside with teams that make use of Chevy’s twin-turbo V6 motors.